I’ve recently finished a project with my Brazilian collaborator Dalson Figueiredo on fostering transparency in research and government, funded by the British Academy/Newton Fund and supported by the Berkeley Initiative for Transparency in the Social Sciences (BITSS). The main purpose of our project was to foster transparency in scholarly research and in Brazilian government institutions by giving workshops and running a reproducible research project on corruption convictions. Here is what I take away from this project.

Dalson and I developed a research and teaching initiative. We combined automated data collection on corruption conviction data with running workshops for academics and civil servants. We wanted to show with our corruption project how a transparent project is run; but also, how the government can improve their access to data on its judicial system.

The main argument of our project was that transparency is a fundamental basis of credibility, trust and legitimacy. With its prominent corruption cases in the business and political world, and a large-scale criminal investigation Operation Car Wash, Brazil continues to face such challenges: (1) Its government lacks transparency in the dissemination of aggregate data, particularly on corruption; (2) the majority of Brazilian social science research does not provide access to replication data.

Since civil servants are educated in social science Departments in universities, we believed that government and research lack of transparency are connected. Transferring insights on open data initiatives from the UK to Brazil, we aimed at fostering transparency in scholarly research and in government institutions.

We ran several workshops to spread reproducibility tools among Brazilian scholars and students, as well as among policymakers on the municipal and state level. 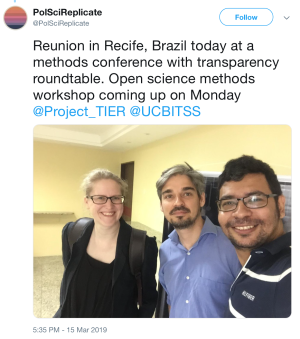 As planned, we ran one workshop at the University of Nottingham (OSF materials), and three further workshops at the University Federal of Pernambuco UFPE (2016-2019), for both undergraduate and graduate students with theoretical and practical training on academic and government transparency. Some of our workshops also included civil servants as audience and as speakers. An additional methods conference which we organised at Dalson’s university in March 2019 included several panels and talks about replication and reproducibility, so that that these topics become more integrated into the wider methods discussions and curricula (graduate and undergraduate).

In March 2019 I flew over to the University Federal of Pernambuco, expecting to start with the basics: make an OSF account, create folders for some dummy data  to be sorted according to the TIER Protocol’s guidance on data storage. The students who came already had OSF accounts, and it took them less than 45 minutes to complete the task. Dalson had apparently prepared them well in his social science and methods teaching … The session ended with an excellent discussion among students about reproducibility and replication.

The main challenge were strikes and political turmoil in Brazil. When we planned a workshop, we had to postpone it because universities were closed for weeks. When we planned to engage civil servants and policy makers, changes in government made access impossible for a while. I had to postpone my travels to Brazil due to the Zika virus and its risks for pregnancy. Sometimes we were wondering if this project was ever going to finish. But then everything fell into place and we even ran more workshops than anticipated. We published the first ever reproducibility article in a Brazilian journal, with strong input from my collaborator’s students and research group:

What did we learn about corruption convictions in Brazil? We created a tool to extract and organize the largest dataset ever produced on corruption convictions in Brazil, with disaggregated information for more than 65,000 general court cases and 18,860 corruption related lawsuits judged in all Brazilian states from 1992 to 2018. Different from previous research on the subject, our approach allowed us to identify four different types of corruption: narrow, public, private and administrative. In addition, we retrieved information on the exact dates of trial for each lawsuit. Therefore, our data provides the first large-N assessment of judicial delay in Brazil since we are able to estimate the elapsed time from a case’s initial filling to its ultimate disposition.

Our main results suggest the following: a) corruption convictions, calculated by the total number of convictions normalized by population size, are steadily growing over time in Brazil; b) different to U.S conviction data, our Brazilian corruption convictions are spatially random; c) a typical court case for any crime in Brazil takes, on average, 1,253 days to be judged compared to 2,283 days for corruption-specific lawsuits; d) administrative corruption is the most prevalent type of wrongdoing and it takes significantly more time to be judged when compared to other crimes against public administration; e) public officials get faster trials for corruption-related charges than non-government employees. Further, we find evidence that corporations face longer trials than individual defendants, even after controlling for judicial level and geographic region. Finally, our estimates suggest that female defendants face longer trials compared to males.

The project enabled us to set up a research collaboration with Eduardo Mello and Umberto Mignozetti, both from Fundação Getulio Vargas (FGV – SP). We are currently working on a project entitled “Information, Corruption and, Voting Behavior: Evidence from Brazil.” The main purpose is to conduct a field experiment during the 2020 national election, but I’ll keep the specifics to myself for now until the experiment is done.

Dalson is working on developing an additional dataset on corruption in Brazil from random audits which are conducted in the country. He also started a collaboration with a local newspaper to built a Policy Observatory. The purpose is to use robust empirical evidence to inform policy analysis and foster transparency in the state of Pernambuco (Brazil). 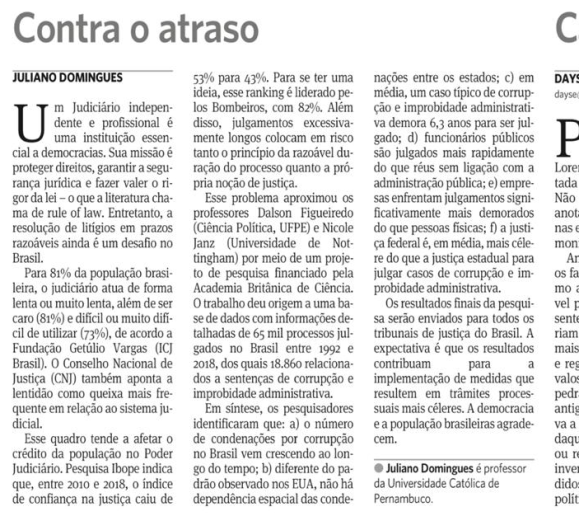 Our work also featured in an audio podcast and in the Jornal do Commercio.

And I have welcomed students from Brazil to the University of Nottingham. There are excellent young researchers in Brazil, and I hope to help them to come to England for graduate degrees.