Getting the idea of transparency all wrong

Following an article in the New England Journal of Medicine, which portrayed scientists who re-use data as parasites, we now hear more on this from Nature. Apparently, data transparency is a menace to the public. The Nature comment “Don’t let transparency damage science” claims that the research community must protect authors from harassment by replicators. The piece further infects the discussion about openness with more absurd ideas that don’t reflect reality, and it leads the discussion backwards, not forward.

Apparently, the trend towards more transparency has left all of us researchers in despair. It’s nearly damaging all of science! The comment published in Nature yesterday starts off by listing all things bad around data sharing:

This can happen to all of us … beware!

The authors also say that “these were all recurring experiences shared by researchers from a broad range of disciplines at a Royal Society-sponsored meeting last year.” I was at a different meeting of the Royal Society – and the tone there was completely different. The overall notion at the event was that openness must be supported, and that science without transparency is – simply – not science. The Royal Society strongly supports data transparency (see here and here).

Replicators are – throughout the whole piece – named “critics”. Asking to see data for published work does not mean that you are a critic, it means that your are a researcher. Actually, wait! Aren’t all scholars supposed to be critical and rigorous?

The article then sets out to “distinguish scrutiny from harassment”. That implies that any time a scholar receives a replication data request, he is likely to face one of two consequences: a) scrutiny of their work, and b) harassment (or both). So if you publish an article, you better not upload the data for everyone – because who knows what will happen next!

This also implies that anyone must now justify their attempt to access data, and prove that they will not harass the original author. Maybe that should become a section on all of our CV’s to be sent along with data requests: “I have replicated x published articles and all findings were confirmed.”

Trying to persuade us of transparency’s menace to the public, the Nature comment uses a type of language that really does not belong in the discussion about data sharing (but provides for an entertaining read):

It may be true that some researchers, e.g. in climate change (apparently a good example for all of science), are subject to attacks by opponents. But that has nothing to do with data sharing and openness. Bringing such language and examples into the openness debate is a distortion of the discussion. Anyone working on climate change who does not share their data is automatically subject to criticism, because opponent can claim the author is ‘hiding something’. Being transparent on how conclusions were reached is exactly the right way to protect yourself from criticism. Holding back your data won’t make opponents go away. And if you really did some mistakes in the analysis, then why should that remain undiscovered? Or wait, I’m not sure I understand science anymore. What was the goal again?

The comment goes on to provide a list of red flags about researchers and red flags about the so-called critics, pretending to provide a balanced view of benefits of transparency versus withholding your data. Again, the list suggests that anyone asking for replication materials could potentially be an amateur, have a financial interest in publishing a failed replication, might plan personal attacks, hack p-values, or insist on access to confidential data.

If it weren’t published in Nature, and if it didn’t have the potential to lend harmful arguments to opponents of transparency, I would not have taken it seriously. 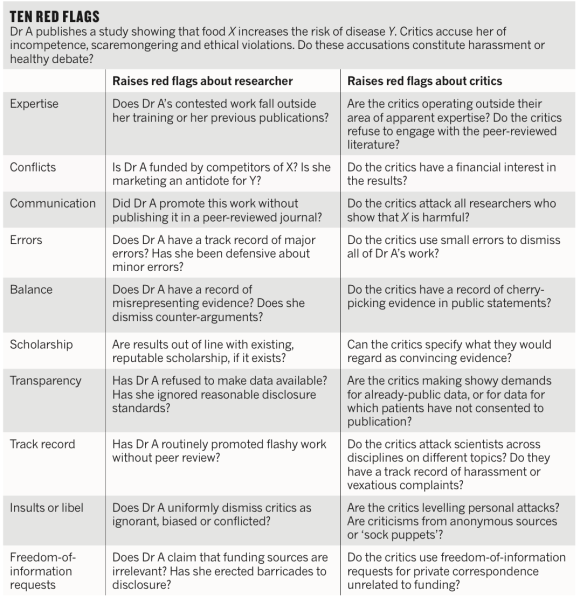 It’s also unclear who the critics are supposed to be. Do they have a PhD? Or is it only Dr A. who is qualified to analyse his/her data?

There is also a list how scholarly communication can be used as a “weapon”.

Transparency does not damage science – people do.

I have no problem with voicing concerns about internet trolls, anonymous personal attacks against researchers etc. But these problems are not caused or aggravated by transparency. The story simply does not work. Worse still, articles like this Nature piece could undermine a healthy trend in the social and natural sciences which aims to improve research integrity and quality of output. The Nature comment was titled “Don’t let transparency damage science”. Transparency does not damage science – people do.

111 thoughts on “Getting the idea of transparency all wrong”